Improving your company culture is easier than you may think 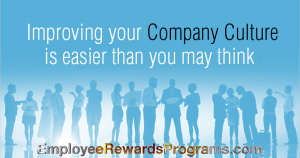 One of the most commonly cited reasons why an employee quits their job is that they did not feel appreciated by their employer. Whether this is due to being passed over for a promotion, feeling disliked by their boss or peers, or feeling like they have not been properly trained; a company’s overall culture plays a large part in the general satisfaction of its employees.

Companies with the strongest company culture not only hire individuals that match the intended atmosphere the company is attempting to create, but they maintain that atmosphere by keeping employees engaged and motivated through open-door communication, a strong brand identity, and happier employees.

Additionally, companies with a positive, strong company culture appeal to millennial workers, where others struggle to retain and understand them. Too often, a new study will come forward and label Millennial workers as lazy, entitled, and wanting a trophy simply for participating. That sort of direct misunderstanding is a reflection of why so many companies fail to retain tech-savvy, innovative young workers. Millennials grew up in one of the largest technological and cultural shifts of the past 100 years. One day communication was done through a phone that only worked in their home, and no idea what “the internet” was; the next they had the equivalent of a small super-computer in their back pocket. Millennials had no choice but to be flexible growing up, and they expect that same fluidity in the workplace. They know change and “the next big thing” are just around the corner.

Where some would say social media has given Millennials the wrong opinion, that their voice matters more than it actually does, this has also given them the confidence to express new and fresh ideas. Millennials don’t want undeserved trophies and awards; they want to know that their voice is heard, and that it is just as much an important voice as the person next to them. At the end of the day, don’t we ALL just want to be heard and appreciated? The most successful companies are flexible, open, and communicative enough to impress a millennial, and in turn, help the more seasoned staff thrive and innovate as well.

Too often, employees base the majority of their praise and critique off a quarterly, or even yearly review; often to less-than-exciting incentives. A strong company culture encourages praise and recognition for those who go above and beyond expectations far more frequently.

If employees feel appreciated and welcomed at work, they will be more apt to talk positively about their company. Rather than shying away from talking about work on social media sites, they will be more likely to engage publicly with the company online. A proud employee will be more likely to wear a shirt with the company logo out in public and socially. This is a simple, yet powerful form of advertisement, that is as cost effective as it is beneficial. A disgruntled employee that tears their name tag off as soon as they get in the car is evidence of a failing company culture.

An employer that fosters an open company culture, will inevitably make employees feel more comfortable expressing issues and concerns, that for other companies, would drive a worker to just quit. If positive actions are rewarded, employees are more apt to strive to try harder. A proud, confident employee will make themselves known, rather than rushing to punch out each day.

One of the easiest ways to make significant changes to your overall company culture is the implementation of an Employee Rewards and Recognition Program, such as the ones found at www.employeerewardsprograms.com. An employee rewards program gives you the freedom to make your employees feel appreciated, through exciting, desirable, high quality company logo items that can be given out for positive actions and special occasions.

Someone suggests a new way to cut down on a major company expense, and it works? Rather than just a pat on the back, reward them with a choice of a company gift! An employee offers to stay late, to complete a big project? Perhaps a company-branded wireless speaker would mean a lot more than a simple “Thanks.” Rewarding employees regularly, rather than just after performance reviews, will not only boost overall morale but make everyone want to put in significant extra effort, in order to earn that reward they have their eyes on. Consider also using your rewards program for certain achievements, such as Employee of the Year, anniversaries with the company, and birthdays. Highlighting these events will make more employees want to participate, and get engaged, so they can act as a foundation for a new, more positive overall company culture. A happier business is just an employee rewards program away.

We Are The Best, Here's Why!

Our Mission is to make you happier

How do we do it? We give you an effective turn-key program, to... Recognize and reward your employees... Improve your culture... Improve employee engagement... Improve productivity... Reduce turnover... Increase profitability... Be happier. .

We want to help you foster a spirit of positive recognition for all types of good behavior, as an ongoing “program” within your company. In turn, we will help drive this positive spirit into your shared values, attitudes, standards and beliefs. We want to improve your corporate culture, and make you happier.

Your corporate culture will improve, and you will be happier.